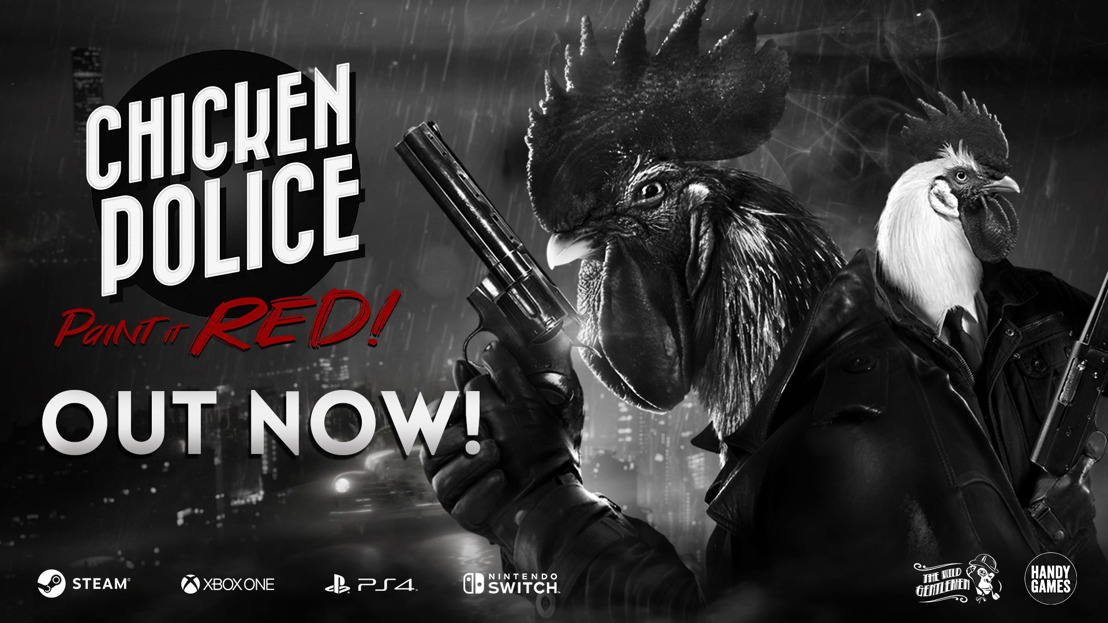 The legendary Chicken Police needs your help in solving a case that went from unusual to life-threatening within a few hours. Marty MacChicken and Santino "Sonny" Featherland are fighting crime in Clawville on PC, PlayStation 4, Xbox One, and Nintendo Switch starting today at 5 PM CET / 9 AM PDT for 19,99 ( EUR / USD / GBP )!

Sonny is an alcoholic, deadbeat detective, waiting for his retirement and only old photographs and newspaper articles serve as reminders of the glorious times when he and his partner Marty were working together as a dynamic duo, the Chicken Police. With nothing less than a cult following of fans, a successful book series about their adventures and professional success any other law enforcement officer wouldn't even dream of, they felt invulnerable. Now they're being asked to investigate a series of strange threats. But nothing is as it seems in the corrupt city of Clawville. It is up to you, to uncover the truth surrounding the secretive Natasha Catzenko and the city's criminal underworld and shed light on the Chicken Police's dark past.

About Chicken Police - Paint it RED!: This Film-Noir inspired buddy-cop adventure features a cast of diverse, fully voiced characters all in the games original, iconic art-style. Crime scenes are to be investigated, clues to be found, puzzles to be solved, and suspects to be interrogated. A modern take on the classic point-and-click gameplay, Chicken Police comes with a grim plot that will keep you intrigued and immersed. Who is telling the truth, who is trying to mislead the investigators, and why? Find answers to these and more questions and bring back some of Clawville's lost color!

"The Wild Gentlemen" is an independent game studio, working on their artistic game: Chicken Police, the "Orwellesque Buddycop Noir Adventure". The team is based in Hungary and consists of six core members and four part-time contributors. Some team members have worked on projects like The Witcher 3, Call of Duty WWII, Warhammer: Mark of Chaos, the Crysis series, Haegemonia, or Ryse: Son of Rome. While individually, most of them have been active members of the games industry for over a decade. Chicken Police is their first joint project.