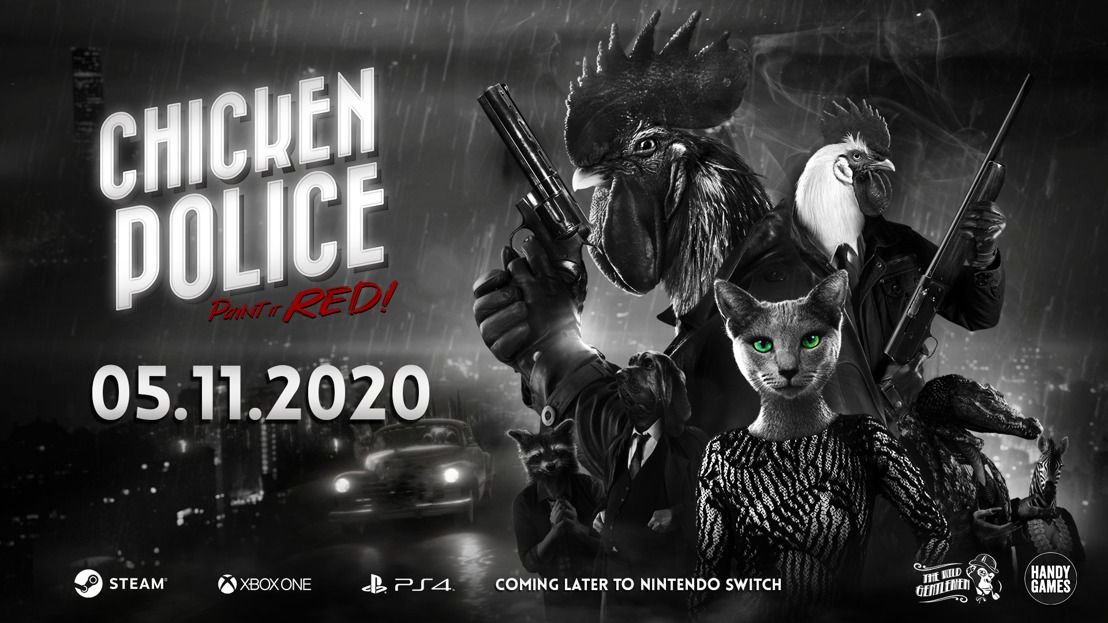 Eger, Hungary/Giebelstadt, Germany, October 20th, 2020:
​Sonny Featherland and Marty MacChicken, aka the “Chicken Police”, once a legendary detective-duo - now a washed-up wreck and a wannabe star-detective. But things are about to change when a mysterious case comes along, getting weirder by the hour and more dangerous than anything the two have faced before.

Chicken Police is developed by The Wild Gentlemen in Hungary. The game is published by HandyGames in Giebelstadt, Germany, and will be available for 19,99 ( EUR / USD / GBP ) starting November 5th ​ 5 PM CET / 9 AM PDT on Steam, Xbox One and Playstation 4 and Nintendo Switch.

"Maybe the most important thing is that the mood and the atmosphere must be coherent. In creating narrative games, you must pay attention to a lot of things that the player maybe won't even notice (or will be affected only subconsciously), but all in all, I believe everything stands on the characters, whom we'll learn to love or hate to be breathing with them within the world they live in.
​
​It all depends on whether you, the player, want to know, is the character have a life outside of the game? If the answer is yes, you, as a writer, did your job well." said Bánk, Director of Chicken Police

"The Wild Gentlemen" are an independent game studio, working on their artistic game: Chicken Police, the "Orwellesque Buddycop Noir Adventure". The team is based in Hungary and consists of six core members and four part-time contributors. Some team members have worked on projects like The Witcher 3, Call of Duty WWII, Warhammer: Mark of Chaos, the Crysis series, Haegemonia or Ryse: Son of Rome. While individually, most of them have been active members of the games industry for over a decade, Chicken Police is their first joint project.