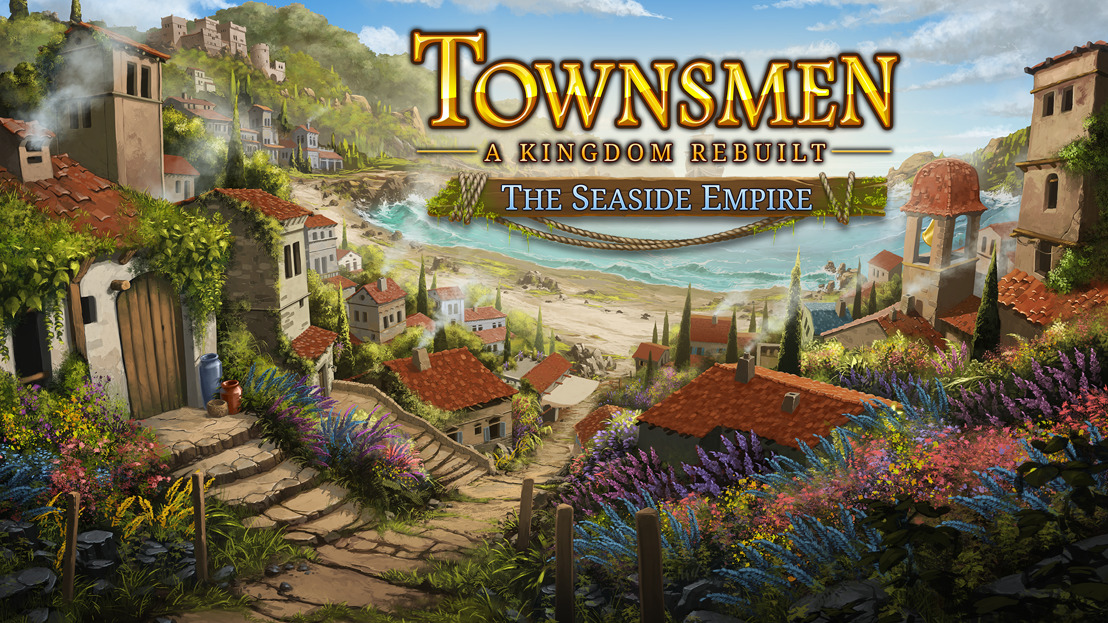 Giebelstadt, Germany, December 3rd, 2019: Picture this, your loyal subjects are living a happy and fulfilled life. Thanks to your rule, your city is thriving and lively. A subject arrives to bring you a message: the queen of the coast requests your assistance in her country. Your eyes wander off into the distance as you think of the crystal blue waters and soothing smell of lavender...

Now embark on your journey to build your Seaside Empire!

Townsmen: A Kingdom Rebuilt: The Seaside Empire DLC is packed full of great features. Enjoy the new Mediterranean setting, build a harbor along the coast to increase your trade, and dive into the all-new story events. But be warned, you may find yourself being forced to make difficult decisions where your choices may bear dire consequences...
​

Set out into foreign lands! Leave the Kingdom of old and settle in a new empire by the crystal clear water of the Mediterranean. Send your builders to plan and construct new settlements in a completely new environment with a fresh look and feel. Expand on the existing gameplay with all new buildings, like the military castle that allows for easier defense, the coastal harbor that increases the trade options, or the Inn that helps you earn money for having a beautifully decorated town. A vast amount of new decorations and other useful buildings allow you to build the medieval seaside metropolis you have always dreamed of.

The Seaside Empire DLC also adds another layer of gameplay with the introduction of difficult moral choices and decisions in the new short story events. Send your villagers on expeditions and adventures or help them with their daily life in a medieval town. Deal with new disasters and weather phenomena. Listen to relaxing new songs and let yourself get carried away by the ambient of the Mediterranean coastline.

Townsmen: A Kingdom Rebuilt: The Seaside Empire will be available in early 2020 for PC and Nintendo Switch. It will also receive a fully bundled release on Xbox One and Playstation 4 that includes the base game, as well as the new DLC.

Townsmen - A Kingdom Rebuilt is a city builder set in medieval times. Grow your tiny village into a grand medieval empire with a thriving economy and happy villagers. Find spots for mining ore, harvest the crops of your farms and collect coins as taxes from your folk. Build jousting grounds, taverns, marketplaces and beautify your city with impressive statues, magnificent monuments, and lush gardens. As you do so, be aware of dangers: bandits are never far away, looking to plunder and pillage peaceful towns. So don’t forget to erect barracks, guard towers and recruit brave soldiers to protect your citizens from harm, too. You rule the entire empire from your castle, and making sure your inhabitants have fun, stay happy and remain safe.