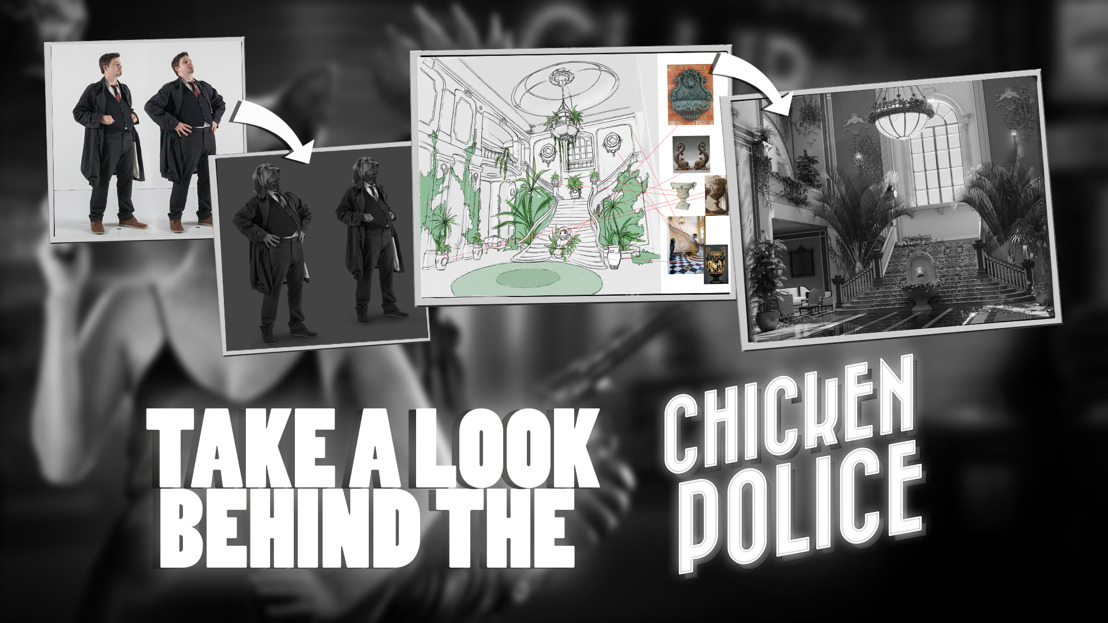 Something Fowl is Happening in Clawville

The upcoming “animal-noir” buddy-cop adventure game Chicken Police – Paint it RED has already turned quite a few heads with its unconventional art style. “Bojack Horseman meets Sin City” has been a common reaction, but of course, there’s more to it than meets the eye. For the first time, Hungary based developers The Wild Gentlemen offer a peek behind the curtains and reveal concept art, voice actors and more.
​

Every character in Chicken Police is fully voiced by professional actors and veterans of the industry. You might recognize Kerry Shale (Sonny), Jules de Jongh (Natasha), Shai Matheson (Marty) and others from big titles like The Witcher, Mass Effect, Horizon Zero Dawn or Mirror’s Edge. You can get a glimpse of what the main cast sounds like in the following Video.

​They May be Chicken, But They Ain’t Cowards

You’ve seen a lot of the prominent aspects before. Film-Noir. Buddy-Cops. These concepts are known and loved by many. But the big question is: Why chicken?
​When asked, Co-Founder, director, writer and designer, Bálint Bánk Varga said:

"One of the main reasons was an old YouTube video where two real chickens fought with some nasty rabbits and basically put them into custody. Like real animal-cops in the field. It was hilarious and amazing! The second reason was that I always wanted to do some kind of animal-noir (in Hungary we have some really awesome stories with anthropomorphic animals), and chickens are cocky and weird enough to be utterly magnificent specimens for this kind of story."

Animal Heads and Human Bodies? Our Models Are Photoshopped… Sorry!

At first, the creators’ goal was an adventure game in the classic pixel-art style. But after playing around with some concepts, the contradictory flair of photorealistic characters and scenery and absurd human-animal hybrids, convinced developers and publisher alike. All photos, which are actually real animals, were taken by the developers themselves, with the exception of dangerous predators, says Bánk. The stars are mostly zoo animals, but Natasha, the cat, for example is a real professional and got a proper photo session in a studio.

The approach for the scenery is similarly complex. Since the game is a fictional world, every scene is handcrafted. Once a scene is written, along with instructions for the artists, they create a concept artwork. If everybody is content with the approach, successively a 3D mockup and 3D render are created, cut into pieces and rebuilt into a 2.5D final scene with lights and filters.

Chicken Police is a story- and dialogue-heavy game combining elements of the visual novel and classic adventure genres. There will be more than 30 characters to talk to, with some requiring you to apply fierce interrogation tactics. Collect tons of clues, evidence and sensitive personal information from the shady characters of Clawville to be used ruthlessly against them!
​
​
​>>> Cluck your way to the Chicken Police Press-Kit